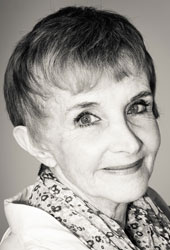 Other commissions for La Boite Theatre include X-Stacy (two national tours, published by Currency Press and Dramatic Lines, London, Matilda Award nomination), Way Out West (published Playlab Press) and Still Standing. For the Queensland Performing Arts Trust she wrote Gladys, My Life is Love, Snapshots from Home, (AWGIE Award 1996, published by Playlab Press), What Next? (AWGIE Award 1998). Other awards include the 2002 Trust Award for Excellence for Outstanding Contribution to Theatre in Queensland and Australia and the 2002 Playlab Award for Services to New Work in Queensland and the 2003 Centenary Medal for Services to Queensland Theatre. Margery and Michael wrote Drama at the Gasfield which won La Boite Theatre and the Queensland Gas Company the 2007 Queensland ABaF award (Australia Business Arts Foundation). In 2009 Margery and Michael were commissioned by Classic Radio 4MBS to write Cribbie. It had a sell-out season at Metro Arts and is having a return season in 2011. Margery has appeared in numerous musicals for the Queensland Theatre Company including A Rum Do, Crushed by Desire, Annie, Hello Dolly, Applause, Cloudland, Animal Farm, Chorus of Disapproval and Seven Little Australians. She returned to the stage for a role in the premiere production of Lottie, the Musical in Brisbane.

In 2011 Margery and Michael wrote the book and lyrics for Behind the Cane, a music theatre production for the Queensland Music Festival. It was staged in the Sound Shell in Bowen playing to eight thousand people over three nights.